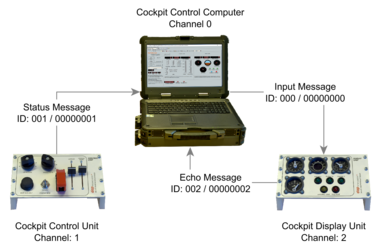 DapTechnology successfully demoed its AS5643 Cockpit Demo at the SAE Mil1394 WG meeting in Nashville, TN. This demo marked the first time that a vendor demonstrated an AS5643 implementation running as a standalone setup. It consisted of a typical AS5643 system with sensors, actuators and a vehicle management device.

Starting an AS5643 project with little to no experience in that area can be a challenging undertaking. Especially the fact that no reference implementations are available and most companies are only involved in the development of a single sub-system makes it difficult to oversee the complete picture. In order to address these typical problems DapTechnology came up with the idea of building a demo that contains key aspects of a typical AS5643 implementation with unclassified AS5643 Slash sheets and ICDs and build upon COTS products and components.

The way we envision the AS5643 Cockpit demo is that it is never finished. Just like the AS5643 handbook is a work in progress to further gather real-world experiences and lessons learned, we would like to continue adding new features and demonstration aspects to this reference platform. We invite you as an end-user to provide us with any feedback or questions you have so we can incorporate that into the demo.

The AS5643 Cockpit Demo can not only be used for learning AS5643 technology as it is today, but it could also be used as a tool for further discussions about improvements to the existing AS5643 specification. DapTechnology has a firmware or software IP implementation for each layer from PHY and Link all the way up to higher-level software so that any possible changes to the AS5643 specification could be tested before finalized.